Steven is a well-known breeder of tropical fish in the UK, plus he runs his own aquatic based business and is also a speaker at meetings. This is the first time he will speak for the IG BSSW. Steven will deliver the opening talk on November 12th at 4 pm (CET): “Breeding Cardinals and Rummynose Tetras”. Let’s try to get to know him a bit. 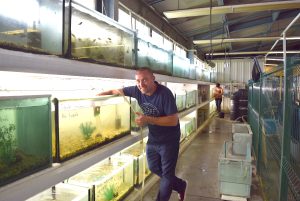 Our speaker is 45 years old and from Warrington, Cheshire in the UK. He started keeping fish in 1990 but didn’t get too serious about it until 2000. During that time and afterwards, he spent many years specialising in breeding Dwarf cichlids and characins, especially Nannostomus. According to his count, he has now bred over 650 species of most major groups of fish. In 2012 he joined the Blue Planet Aquarium in the UK as a freshwater aquarist, where he kept learning and understanding the wet hobby. Soon later, in 2013, he was promoted to Display Supervisor, overseeing all aquariums both Marine and freshwater. But only a year from that Steven moved to Chester Zoo Aquarium as assistant team manager in the Aquarium. He shares his experiences about this time in another talk he gives to mostly British societies. Steven spent the first year at Chester installing tanks and tropical ponds into Monsoon Forest, the UK’s largest indoor zoo exhibit, it was opened to the public in 2015.

But besides all his working experiences he gained, there was always the interest in getting to know the natural part of the hobby, the biotopes, and the environments he used to replicate throughout all the years. That’s why he travelled to Mexico and took part in the Goodeid fish ark project, with which he was involved in the reintroduction of Zoogoneticus tequila in 2017. Afterwards he headed south and travelled to Brazil and the Rio Negro with Project Piaba to study the ornamental fish industry out there. 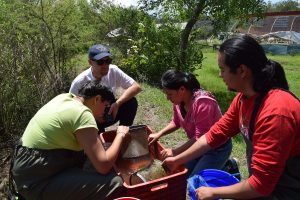 He always did and still does keep close contact to clubs and the hobby, he has been involved with aquarium clubs and associations in the UK since 2006. Always giving the best he could, serving on the committee of both the British Cichlid Association and my local club, Preston & District aquarist society.
In 2019 Steven started his own business and now owns and grows Premier Aquatics ltd into a brand that is recognised for its integrity and quality. Steven can claim to know all sides of the hobby.
However, Steven says: “Who knows what the future holds? I will continue to support the hobby and remain an enthusiastic and engaged member of the fishkeeping community. I look forward to speaking to your members in November and sharing my experiences with breeding Cardinal and Rummynose tetras.”