Notropis chrosomus has been available in the hobby for several years yet has never gained the popularity which it so deserves. 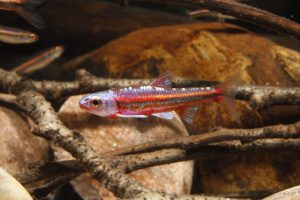 Luckily for us as hobbyists and collectors, the tide seems to be turning, with the Rainbow shiner, as it is informally known, beginning to appear in more and more shops. Unfortunately, care is often misinterpreted, and these fish usually meet an untimely end as aquarium subjects. Notropis belongs to the family Leuciscidae, which also contains a species you may have caught in your local river: Phoxinus phoxinus. If we are to ignore colours, the two fish, which are separated geographically by the Atlantic Ocean, are very similar in not only shape but also behaviour and ecology. They favour shallow, cool, lotic bodies of water with often rocky substrates. In the aquarium, it’s our duty to recreate these conditions, yet unfortunately ignorance often gets the better of us. It seems far too easy to purchase Notropis and keep them like Melanotaenia, in a tropical planted tank. Under such circumstances, the elevated temperature leads to increased metabolism, excess pressure on internal organs and ultimately results in perishing. 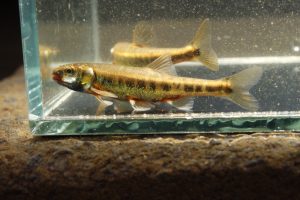 If we look at the biotope of the Rainbow Shiner, the Black Warrior River System of Alabama, US, exhibits average yearly low temperatures of around 45 °F, whilst highs are somewhere in the 77 °F region, however the area is subject to strong seasonal differences. This really means that Notropis should be kept much like subtropical Channa spp. and exposed to fluctuations of temperature for good health. I have found that, when kept in unheated outbuildings such as a garden shed or garage, the fish thrive. Others report resounding success in well-sheltered outdoor ponds, though one must make sure that return rates are high with good oxygenation. 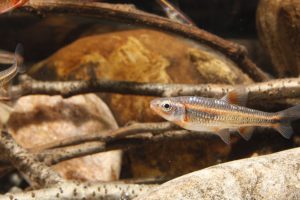 Being a rheophilic species, even in aquaria the flow rate should be kept high. My group are kept in a 29 inches tank with a 15× turnover. They do not at all struggle to swim through it. There are many options for aquarium scaping. Notropis look excellent under strong LED lighting and so a planted aquarium is ideal. In nature, shiner spawn in the nests of larger species such as Campostoma oligolepis and Nocomis leptocephalus. 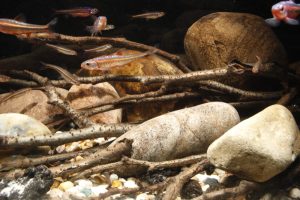 In a domestic setting, larger sized boulders, around two inches in diameter and upwards, are accepted as spawning grounds. Other than this peculiar choice of spawning media, the breeding and raising methods of Notropis can be considered similar to Danio species with fry requiring small
foods such as Paramecium to start with. Breeding usually begins in late spring, when the temperature reaches around 59 °F. If it is not your aim to breed the Rainbow shiner, they are simply stunning centrepiece fish for a display tank. If you wanted to add tankmates, Barbatula barbatula is ideal, even if they do not coexist in nature.