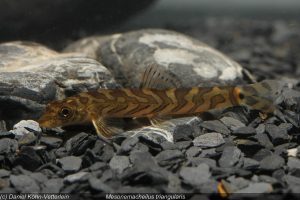 The fishes appear irregularly in the German pet trade but published knowledge from the aquarist practice is still hard to find, at least in German-speaking countries. BSSW members who made their own experience with this species are always invited to make it available to others, e.g., in the form of an article in the BSSW Report.

Compared to some closer related loaches of the genus Schistura, the animals in the dealer’s tank seemed to be rather reserved. The animals were continually active and constantly engaged in small fights, but I could not observe any real damage originating from the fights or chases. Injuries on the other fish (barbs), which can be observed from time to time with the more aggressive loach species, such as torn fins or, in the worst case, bitten eyes, were not to be seen here. Nevertheless, it is advisable to keep this species in aquariums that are rich in hiding places, and where the number of hiding places clearly exceeds the number of animals. This reduces the stress for inferior individuals. It is certainly advisable to keep them in a group of at least 5-10 animals to spread any potential aggression that may occur. When selecting other fish for the tank, fast swimming species are to be preferred, long-finned species and breeding forms should better be avoided.

The largest known specimens of this species have been about 7 cm long in TL. This species can therefore be recommended for tanks from 80 cm length, depending on the size of the group.

The origin from the Travancore Mountains plus the monsoon climate of southern India suggests that this species does not need permanent temperatures around 25 °C for its well-being. Seasonal care should be possible or is probably even beneficial to the health of the animals. However, a water temperature significantly below approx. 20 °C should be avoided. A strong current is not necessary, but a sufficient oxygen supply should be ensured. Feeding is unproblematic, dry, and frozen food is also accepted.

Fortunately, this species has already been successfully bred. A reproduction of the breeding report can be found in OTT (2017). After a water change with cooler water, the eggs were apparently distributed in the aquarium, not following a special procedure. Raising the young was similar to how it is done with barbs and tetras, the young are initially too small for Artemia nauplii though.

All in all, Mesonoemacheilus triangularis is a pretty loach species that one would wish to spread further.