One of the barbs I got from Thomas TILLMANN (Hobbyzoo Duisburg) is Osteochilus vittatus. In the first three days after arriving in Kiel I was neither able to take photos nor even to try to identify the species. 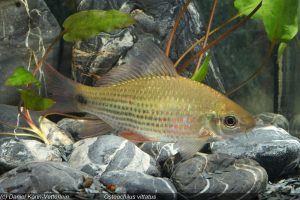 The single specimen was monotonous, namely silvery-olive green in colour, showed no markings whatsoever and did not reveal a single characteristic that could have been used for orientation. I therefore decided to photograph the other barbs first, which settled in much faster. And so, after three days without any change in the holding tank, this specimen was transferred to the photo tank, given time to settle in and then, after about a week, a completely different fish swam in front of me. A black spot had formed on the caudal peduncle, all the fins, but especially the pelvic fins, had taken on a slight red shimmer and beautiful pale red dots surrounded by bluish iridescent spots stood out behind the gill cover. From the height of the pelvic fins to the caudal peduncle, there were horizontal rows of dark spots. Until today, the colouration has intensified even further. The basic colouration is now a strong olive-green, especially in the dorsal area, and silvery in the ventral area. 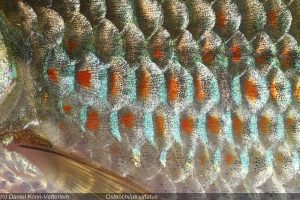 There are currently ten secure synonyms of the species, a further synonymisation is possibly still pending and is unclear so far. According to KOTTELAT (1998), the species lives in almost all types of biotopes, but is mainly found in rivers with weak currents and muddy substrates. TAN et al. (2009) also caught O. vittatus in stagnant waters with a loose bottom on the island of Sumatra. The preference for soft bottom and weak current is explained by the carpfish-typical and burrowing feeding pattern, which I can also observe in my individual. SOKHENG et al. (1999) describe the species as a spawning migrant that visits flooded areas during the rainy season and spawns there. The young migrate quickly back to the permanently water-bearing rivers and continue to grow there. The distribution area is considered to be the areas of the Mekong and the Chao Phraya, the basins of Thailand’s two largest rivers. The species also lives in southern Myanmar and China.

In literature, maximum sizes of 20 to 32 cm are given, my individual currently measures ten centimetres and seems to increase in width rather than in length. I cannot make any statements about intraspecific behaviour, and no aquaristic experience could be found. As expected, there have been no difficulties in the last few months, my barb lives relaxed in the predatory catfish tank and snatches food from the slow cave stools.