From 20th to 22nd May this year, it was finally time again. After a two-year break, members and guests of the ÖVVÖ met for the second time after 2017 in Rankweil, in the west of Austria, and celebrated the 16th ÖVVÖ Federal Congress. Among them were numerous BSSW members. 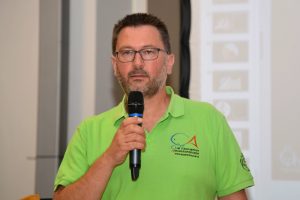 The organisers Heinz WILHELMSTÄTTER and Gerhard KIEFNER of the “Club Vorarlberger Aquarienfreunde“who had already successfully organised a congress before, had invited any many were following the invitation. From Friday evening to Sunday noon, a varied and interesting programme was on the agenda, which will only be touched upon here. The event got off to a top-class start with eDNA (environmental DNA) and the speaker did an excellent job of presenting this relatively new research method for biocoenoses in selected biotopes. An ideal introduction, linking vivaristics and science, to a weekend that was just about to begin. 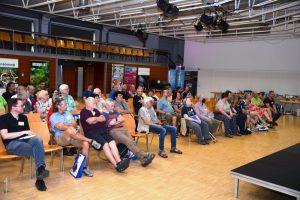 From now on there were no more breaks in the meaning of rest and relaxation, too many faces had not been seen for a while and too many stories had been kept to oneself for too long. After a good dinner, we sat outside for a long time, chatted extensively and for many participants the evening only came to an end after a long walk at night. 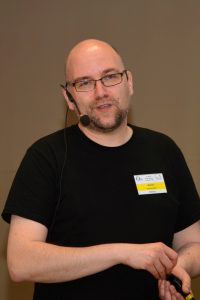 Achim WERCKENTHIN followed on the broad topic of “ornamental fish diseases”. As a former employee of the German wholesaler aqua-global he knew about classic problems with importing wild-caught fish and also captive-bred fish from abroad. He presented the most important ones with the help of pictures and illustrative graphics, thus helping those present to make their own diagnoses in future, to prevent diseases and to initiate the right treatment. He provided informative microscope images of the diseases discussed, which may have provided some new insights even for the long-established aquarists in the room.

Lunch could not be over fast enough, because the programme continued and Hans-Georg EVERS took the participants to the Bird’s Head, a species-rich region in northern Papua New Guinea. Many times he has travelled the area and searched for numerous rainbow fish species, about some of which nothing was known other than their existence and which had not been seen in aquaristics until then. In this way, he was able to demonstrate the human influence and the changes that accompany it, and to stimulate critical thinking. It should be emphasised that the animals caught on these trips are integrated into a breeding project in Indonesia, where the species are propagated in large numbers for aquaristics and science. In this way, species can not only be made internationally accessible, but also no natural removal is necessary. 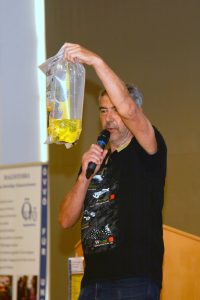 Inseparably linked to the Federal Congress and always an entertaining item on the programme is the auction on Saturday afternoon. Once again, numerous companies and sponsors had provided vivaristic products, which were then auctioned off to the bidders in almost three hours. The proceeds from the auction went to the ÖVVÖ and the organising association. Highlights of the auction were the offspring from our own ranks: Cambarellus, Melanotaenia, Ancistrus, Corydoras, as well as numerous magnificent aquatic plants, plus several kilograms of gummy bears and culinary specialities from the region changed hands.

Another “social evening” followed, as it is so nicely described. We sat on the hotel terrace again until early in the morning: planning joint events, even a few ideas for expeditions were exchanged, fish stocks were analysed, problems discussed and some of the local specialities were also looked at again in more detail.

On the final day, there were two more lectures that thematically closed the circle and fitted wonderfully into the programme. Christoph Denk introduced modern seawater analysis and explained the advantages that seawater aquarists can have by controlling trace elements, nutrients, etc. at the highest technical level. With his company Oceamo e.U. he offers all possibilities and individual solutions for problems that may arise. As with the previous lectures, this lecture also encouraged people to think “two corners ahead” and to deal with circumstances that may not yet be an issue now but could certainly become one. 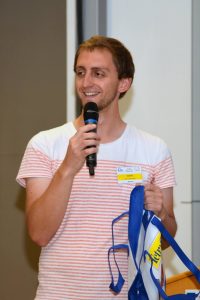 Thus, after a final lecture on the killifishes of Bolivia, the 16th ÖVVÖ Federal Congress came to its too early end in the afternoon. It was fun! The relaxed and not at all pompous atmosphere throughout the weekend was what many needed after a lack of opportunities in the last months. And when I look at the diary and see what was planned during these three days, I am looking forward to many more “presence meetings” in the near, very near future.