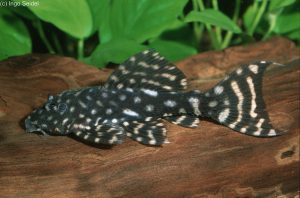 In fact, wild specimens of this species are hard to get, which makes this species rare in the trade. Most animals in the trade are offspring from a few experienced breeders, especially the chairman oft he Catfish Study Group, Mark WALTERS and my good friend and world-wide recognised Pseudacanthicus expert Ole PAULSEN. 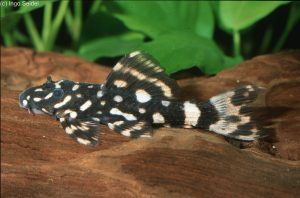 I am currently keeping a small group of these animals again, which I acquired from Mark at the CSG convention in 2020. These individuals are also the reason why I am finally writing this text, because no Pseudacanthicus species that I have ever kept or seen in friends’ homes is so variable. When NUMRICH (1990) found this catfish 31 years ago as a by-catch between Peckoltia species and presented it in DATZ, one of the juveniles showed beautiful large white blotches on a dark background, the second one, which was of similar size, already showed smaller spots on the dark-grey base colour. While in Pseudacanthicus sp. “L 97” the clear pattern of dots only fades a little with age, but remains present, most Pseudacanthicus sp. “L 452” from Peru and P. sp. “Alenquer” show a variance in the pattern: the small, clear dots, which the juvenile animals still had, can blur or join.

In Pseudacanthicus sp. “L 65”, on the other hand, the dots or spots quickly turn grey, or the coat of dots disappears almost completely. Those who have already kept this species themselves know that specimens, which can be really pretty when young, can quickly become a “grey mouse”. It is also remarkable that not all young animals have these beautiful large white blotches like the animal from DATZ. Even in one clutch the variance is quite large. There can be anything from large blotches to a fine pattern of dots or hardly any dots at all. When reaching a size of 10.0 cm TL, the large spots disappeared at the very latest in the last specimen I’ve kept. SEIDEL & EVERS (2005) also pointed out in Catfish Atlas 2 that this species is very variable. 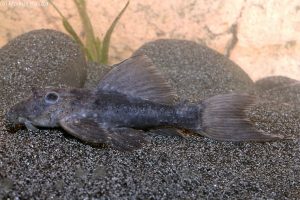