As an aquarist since I was 12 years old, I have been dealing with South American catfishes and tetras for a long time. I am especially interested in breeding of species that receive little to no attention at all. Here I found my aquaristic home in the International Community for Barbs, Tetras, Loaches & Catfishes (IG BSSW). 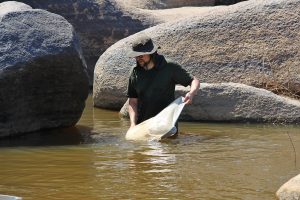 After a trip to Bolivia a few years ago (“SiluCha Bolivia”) I am now especially interested in the conservation of Bolivian species for the hobby and together with my fellow travelers I try to maintain the populations we currently have. Another area of interest is the broad field of diseases and disease prevention of aquarium fish. For almost two years I worked for an ornamental fish wholesaling company where I was responsible for fish health, among other things. On the mentioned trip to Bolivia we collected Tyttocharax tambopatensis, which is the species my talk is about on 12th of November.

Addition from the current SalSym organizing team: Achim Werckenthin was instrumental in founding the “Salmler-Symposium”. Together with Eckhard Fischer and Armin Senger, he established the event in 2016. Both the first execution and the second (2018) were a great success and only because of the pandemic, there was no further repetition so far. But even before that, our speaker was active in the IG BSSW, on the one hand as an author for the BSSW Report, on the other hand as a lecturer in the regional groups. Thematically his contributions were oriented to the unusual, often rare, mostly inconspicuous small species among tetras and catfishes.